skip to main | skip to sidebar

Words of wisdom, courtesy of The Dictator

I haven't posted in like, forever. Life sucks. Let's move on.

Here are some nuggets of wisdom spewed forth from The Dictator's mouth this week:


"You should have another kid and name him Know It All Jr."

"Meetings are boring, that's why they're called board meetings!"

"This music is horrible. It must be from the 80s."


It is seriously a miracle he's survived this long.

Hubs has been laid off for a year and a half now, which means that my Pottery Barn/Pottery Barn Kids/Target shopping has taken a serious hit. This sucks. BIG TIME.

The upside to being poor is that I've rediscovered the beauty of Craigslist. I'm not going to lie, I love it. I scan the "for sale" ads looking for wood shit to refinish and live out my ghetto style Pottery Barn fantasy with. It's amazing.

1. This is not a "desk". This is what most people would commonly refer to as a "table". Nobody over 2'8" could use this as a desk. Also, there is only one drawer and no chair. Hence, table. 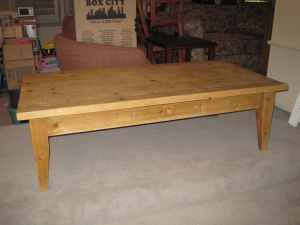 2. This is not a "carpet". This is what most people would commonly refer to as a "rug". It only covers a small space and is easily portable, unlike carpet which is generally large and affixed. Rug. 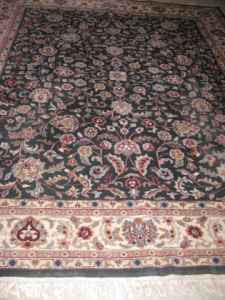 3. It's "shabby chic", people...not "shabby sheik" or "shabby chick". Also, just because it's old and nasty doesn't mean it's shabby chic. It just means it's crap.

4. Please don't call your "dresser" a "chest of drawers". It's not 1935 and nobody knows what you're talking about.

5. It's "wrought iron"...not "rod iron". Just for fun, I Googled "rod iron" and got this as a definition: "Common misspelling of wrought iron". Ha! Even Google thinks you're an idiot.

7. I don't care how much you paid for your beloved treasures when you bought them. I want to know how low you're willing to sell them for NOW. Great, you paid $1600 for it two years ago. Will you take $20 for it now?

8. Seriously. Pictures. Nobody's going to buy your shit without pictures, and they're free to list, so throw some in there. Otherwise you can expect 427 emails that say, "Do you have any pictures you can send me?"

9. If your items's been listed for five months and it hasn't sold, it's probably time to lower the price. Nobody's going to pay $450 for your 1985 oak end table, even if the top lifts off for extra storage.

10. OH. MY. GOD. Post once. Just once. If I delete an item I'm selling, Craigslist makes me wait three days to put it back on the site, but somehow Joe Blow in Chino is able to list the same goddamn bookcase 14 times a day. What the hell?

Sigh. I think that about covers it. Happy shopping!

Remember me?
Still here.
Sigh. Whatever.
Guess what I got in the mail two weeks ago? A letter. From a collections agency.
IN THE AMOUNT OF $100,000.00.
Did you catch that? That $100,000 part? Because that's TOTALLY the best part.
For those that don't know, we foreclosed on a condo we owned in 2007 (like 30% of America has done by now, but for the record...we were SO doing foreclosure before it was cool). Interest rate up, couldn't refinance because we owed more than it was worth, blah, blah, blah. I swear to God, it's the same story everyone else has.
So we walked away. It went a little something like this:
Talk, talk, talk
Plead, plead, plead
Sob, sob, sob
Pack, pack, pack
Move, move, move
Sob, sob, sob
Sold at auction
That was three years ago, and since then, my mom has died, Hubs lost his job and had two knees surgeries and we've moved twice.*
It sucked but life goes on, right? Years pass and it becomes a fading memory.
Until Friday, when I got the collections letter.
Seems in the good ole' state of California, your original loan is a "purchase money loan"...money used to buy the house. This means it's a "non-recourse" loan...the bank can't come after you for the difference.
BUT....
If you refinanced your loan at any time, it is no longer a "purchase money loan". This means the loan becomes a "recourse" loan, where the bank can come after you for the deficiency.
THE $100,000.00 DEFICIENCY.
Well...pardon my French, but fuck me twice.
So, after crying, and pleading, and consulting with two attorneys, and crying some more, and eating a tub of raw chocolate chip cookie dough...we'll be filing bankruptcy. It's the only way to protect us from this ginormous debt we didn't even know we had until two weeks ago.
Sigh. Whatever.
We'll just keep on truckin'.
And in the meantime, I'll remember my happy place: 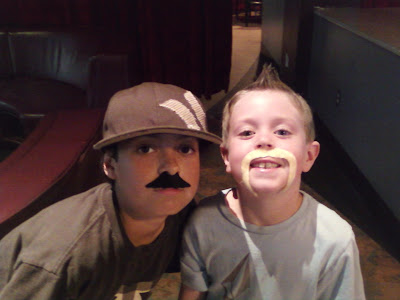 *This sentence sums up why my life freaking KICKS ASS.

The conversation between me and The Dictator on the way to school the other day:

D: Mom, are you supposed to be driving with your elbows?

M: Only when you're putting on lotion. Duh.

Sometimes my magnificent parenting amazes even me.

The cashier at Albertsons is having custody issues...ask me how I know.

Can someone please tell me when it because acceptable for grocery checkers to hold intenstely private conversations in front of customers? Did I miss this newly acceptable behavior?

The other night I was at the store...and yes, it was late, but only like 9:30 or so and there were still PLENTY of people in line, a fact our friendly neighborhood grocer seemed oblivious to.

I was loading my groceries on the conveyor belt, carefully stacking yogurts five high and cereal boxes four deep, already pissed off at my cashier because, dude. Move the freaking belt and we won't have this problem.

So my stuff is on the belt, my wallet is out and he's running my groceries over the beeper (again: Dude. If it doesn't work the first time, it's probably not going to the 14th. Manually enter the goddamn numbers.) The lightning bolts shooting from my retinas were apparently not affecting him at all, because this is the conversation he was having with the bagger (easy on the eyeliner there, young 'un):

"I know, right? I mean, I already got custody of my first son and my other one can't stand his mom. I don't get why I have to keep paying her child support and pay for everything else he needs when she just sits on her ass all day watching soap operas. He's already told me, when he's 18, he's out of there. They can't stand their mom."

Are you shitting me? You're seriously having THIS conversation in front of me (and nine other pissed off customers)? This one? About child custody and how much your kids hate their mom? And this is ACCEPTABLE to you??

The sad thing is, this isn't the first time I've heard about some grocer's boyfriend, or prom date, or custody status, or weight issues...it seriously happens every single time I'm at the store after 8:00.

Look...I'm not exactly "appropriate". But damn, I'm smart enough to know that my stupid ass shouldn't sit and tell my co-worker about the annoying rash I've had for three days in front of a policyholder.

All I'm saying is, your private life should be private, not broadcast to all shoppers at Albertsons on Tustin & Collins. Seriously. Censorship is our friend.

Well, not mine...but you know what I mean.

This morning, while in the car on the way to school and listening to the radio:

You know what I hate? Overreactors.

Today as I was driving to work, I maybe wasn't paying as much attention as I should have been. I maybe was talking on the phone and changing the radio station, and I maybe swerved a little bit into the next lane.

The lady next to me (who I DIDN'T hit, by the way) honked three times, pulled up next to me and stared at me for almost an entire block...which, now that I'm thinking about it, is pretty impressive. How come she didn't swerve while doing so? Hmmmmm. Must master that.

My point is...SERIOUSLY, LADY. Relax. I didn't hit you, or cause a 4-car pile up. I just swerved a teensy, tiny bit. We're both still alive and kicking, although you might want to consult your physician for a Xanax prescription.

So I've been MIA for a few months now, just trying to sort out some shit in my "real" life. This means my blogging life has gone kaput.

Unfortunately, it's hard to be funny when life keeps giving you the big middle finger, so I've taken a blog time out and haven't posted anything in a few months. I thought it wasn't an issue, but...some of yous are bitchin'.

Turns out there are a FEW (very few) folks around these parts who actually LIKE reading my blog, dare I say even look forward to reading it. Huh. Who knew?

So my resolution four months into 2010 is to start blogging again. It won't help me lose weight, or manage my finances better, or end world hunger...but hell, it might make a few of you giggle and as a bonus, get some of this shit running around in my brain all the time out. It's a win/win.

I'll be funny. I promise.

And I'll have great stories and amusing anecdotes. I promise.

But for right now, all I have is this:

- My 6th grader has a better social life than me.

- My Kindergartner is quickly working his way towards juvenile delinquency.

- My husband still has FAR too much spare time.

- If Bad Dog eats one more goddamn thing in this house, I'm going to gas her. Not really, because I love her. But something really, really bad will happen. As soon as I think of it.

- My freckles ARE NOT growing into one giant tan. Lame.

I love the library.

I mean, I loooooooooove the library.

I love the stories, and the smell, and the visions I have of curling up on the sofa and spending some quality time with myself, sipping hot chocolate and cuddling with my Snuggie.

Except my "quality time" is spent with two kids yelling and two dogs shoving their noses up my crotch. And I don't own a Snuggie. And it's hot as shit right now.

The other day, I got a call that five of the ten books I have on hold were available. Yes, five. I'm aiming high.

This was the conversation between me and my friendly library employee:

M: Is my mother-in-law here?

FLE: This is the Orange Public Library. We're calling because the books you had on hold are available fo pickup.

M: Sweet! Which ones are they?

M: I know, right? I'm going to have so much fun tonight!

This is what I found getting in the shower the other day. 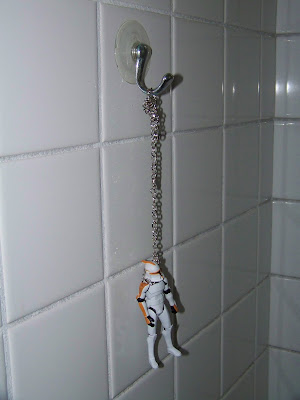 Should I be worried?

Maybe I'll start sleeping with a knife under my pillow.

You know...just in case.

Here's the deal: If you don't comment, I don't know you're reading. If you're not reading, why am I writing? Silliness. Stop that creepy lurking thing and type me a note. I'm needy.

FOR THOSE OF YOU JUST JOINING US:

Older Son: Formerly "PPT". Now known as "The Hormone King", due to his sudden mood swings and overall bitchy demeanor. 13 years old. I know. Kill me.

The Boss Lady
Orange, California, United States
I'm just your basic old mom, wife, employee, maid, accountant, tear-wiper, taxi driver, disciplinarian, almost-middle-aged gal trying to make it through the day. And have fun while I'm at it. Or at least hang on to my sanity.

MORE READING MATERIAL SURE TO OFFEND:

PEOPLE I SEMI-STALK (PALS & SUCH):

PEOPLE WHO STALK ME FROM AFAR:

WELL, THIS IS A RANDOM SPOT.